Head and neck cancer, like all other cancers, can have debilitating effects on the life of a patient since it can directly impact one of the most vital and prominent parts of the human body. It can dramatically alter the facial appearance, affect a patient’s ability to breathe, eat and hamper a human being’s most characteristic feature of verbal communication.

Laryngeal cancer is the second most common type of head and neck cancer, which at times can, unfortunately, necessitate a near-total or a total laryngectomy. This surgery can save the life of an individual with a severe compromise on their quality of life which can leave them feeling socially excluded, discouraged, and even robbed of their identity and livelihood. This incapacity becomes more pronounced for professional as well as essential voice users like teachers, orators, and singers who had to make a harrowing decision between their life and their career.

Medical science may not have advanced to the extent of completely restoring a patient’s lost voice with all its characteristics intact, but it does offer three viable alternatives: Esophageal speech, Artificial/electrolarynx, and the most commonly opted state-of-the-art tracheoesophageal speech. However, this comes with a hefty price: patients in India have had to spend an approximate amount of INR 74,000 (about US $1000) to afford this chance of getting back into a life of near normalcy. In addition, the repeated cost of having this prosthesis replaced every six months comes across as a significant limitation in a country where nearly 6% of the total population lives in stark poverty and this would result in nearly 200 thousand individuals being denied of the opportunity to speak again since their fateful surgery.

To combat this, a Bangalore-based medical device manufacturing start-up decided to create a solution that called for a collaboration with a very unlikely partner: a toymaker in Channapatna, which is a small town in the south of the Indian state of Karnataka famed for its lacquerware and wooden toy industry. This pioneering medical invention, which made waves in national and international media, even earning a feature by BBC News in 2017, is the brainchild of Innaumation Medical Devices Pvt. Ltd. in association with a team of doctors and biomedical engineers in Bangalore. The device is priced at just INR 8,000 (which roughly equates to US $ 100). Over 700 patients from across the country have been fitted with this ingenious prosthesis ever since its launch and about 90% of them have reported being fully satisfied with the quality and results of using the device.

In the true spirit of the saying ‘Necessity is the mother of invention’, the company based their idea to revolutionize laryngeal cancer rehabilitation in India on a resolute belief that speech is a right and not a privilege. They have partnered with the Aum Voice Foundation which provides financial support to the economically marginalized strata of the cancer-stricken population, by organizing national-level fundraisers to crowdsource funding for the prosthesis, under the management of the SDMC trust. In addition, they have also founded the Konttho Club, which is a national support group for individuals whose lives have completely transformed post laryngectomy. With a name meaning throat or voice in the Indian language Bengali, this club was first started in Kolkata in December 2020 and later branched out to Bangalore in March 2021. Besides uniting laryngectomee patients across the country, the club also aims to expand its reach to other cities across India, and gain more market visibility to reach its goal of benefitting patients who cannot avail the prosthesis via prevailing government welfare schemes such as Ayushman Bharat.

I was given the opportunity of a lifetime to work closely with this philanthropic team of professionals during my internship at HCG Cancer Hospital, Bangalore in my undergraduate final year. I was also able to witness and help out during a couple of these fitting procedures for patients which barely took 10 minutes, as opposed to a minor, yet lengthy surgical procedure which was the norm earlier.

A recent chance to interact with one such patient whom I had met during my internship, led me to enquire about his experiences with the prosthesis:
In conversation with Mr. K, an amicable man in his sixties and a user of the voice prosthesis for over three years, he was all praise for the device. “After I lost my voice, I had to shy away from social gatherings for quite a while. It didn’t bother me as much when the lockdown was imposed, but it was certainly exasperating not being able to say a word without signing with my hands!” He tells me “However, after being fitted with this prosthesis, the situation has greatly improved. I am a sports enthusiast and a sportsperson myself. So my ability to talk and communicate with the team-mates on the field has always been immensely important to me.” He went on to tell me how the prosthesis allowed him to step back into his pre-cancer lifestyle without major hitches. “I don’t let my medical limitations and the added inconveniences of social distancing hold me back.

I can have long phone conversations with my friends and family. I am able to speak confidently during my sports association meetings again!” he adds elatedly. “There are a few minor problems at times, but I have my doctors checking up on me every six months and when they resolve those issues, it works just like new.” He is now happily and comfortably settled in Tamil Nadu with his family. When the agony of disease does not differentiate between the economic status of the afflicted, then why should rehabilitation options vary for the rich and the poor? Like a wise soul once said “Changes call for innovation and innovations lead to progress”, this medical marvel and its makers have sparked an evolution of affordable medical solutions for cancer and other debilitating conditions for the next several years to come.

Ms. Aditi Kini will be presenting her research work at the 8th Emirates Pathology & Digital Pathology Conference on August 10-12, 2021. Join her by registering at the conference: https://pathology.universeconferences.com/registration/ 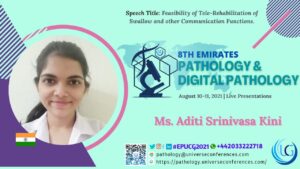