The study of the molecular processes by which microorganisms infect humans and other animals is known as microbial pathology. A good set of tools have been developed by bacterial, protozoan, plant, and infectious agent pathogens to locate themselves within the host and obtain nutrients that also cause injury and illness.

The study of microbial pathogenesis examines the molecular processes by which bacteria infect people and other animals and produce disease. Pathogens that are bacterial, protozoan, fungal, and viral have developed a wide range of tools to settle in the host and get nutrition, which also cause harm and disease. Host defence evasion is one of the additional pathogenic mechanisms.

What is microbial pathogenesis?

The ability of microorganisms, or their components, to infect a host after evolving a complicated way of interactions from both hosts and pathogens, is known as microbial pathogenesis.

Disease-causing pathogenic bacteria have evolved numerous virulence mechanisms over the long course of evolution, as well as virulence-encoding factors or genes with inducible or constitutive expression patterns that create proteins or other biomolecules.

What is the role of microbiology in pathology?

Diseases brought on by infectious organisms like bacteria, viruses, fungi, and parasites are the focus of microbiology. Microbiologists play a part in patient treatment as well as in the lab. It offers participation in a variety of activities covering:

Less than 1% of bacteria, for instance, are hazardous germs that can enter our bodies (the host) and cause illness. Infectious diseases like the flu and measles are brought on by microbes.

Additionally, there is compelling evidence that suggests bacteria may have a role in a number of chronic, non-infectious disorders, including coronary heart disease and a few types of cancer. Different sorts of microorganisms cause various diseases. Pathogens are microbes that cause disease.

It’s crucial to keep in mind that:

In order to diagnose or rule out infectious disorders, the anatomic pathologist is crucial. Using the morphologic analysis of biopsies and cytologic preparations, a range of disorders can be definitively established or ruled out. The pathologist should note any related bacteria or viral-associated cytopathic effects once they have determined that a condition is most likely caused by an infection and have described the inflammatory response. Regular hematoxylin and eosin-stained sections may make some bacteria or their cytopathic effects plainly evident, but additional histochemical stains are frequently required for a thorough characterisation. incredibly specialised molecular methods, like immunohistochemistry 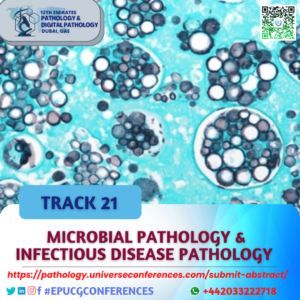